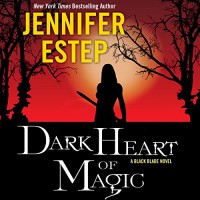 Dark Heart of Magic, the second book in the exciting Black Blade trilogy, opens with narrator Lila Merriweather and good friends Devon and Felix (all of the Sinclair Family) discovering that something has the tree trolls agitated. Although this is an intriguing mystery, it must be put aside because of the annual Tournament of Blades, a competition that pits the best youth fighters from each Family against one another in a 3-day event. Lila and Devon are two of the many selected to represent the Sinclair family, just as the usual suspects (along with some new ones) are also selected to represent each of his/her Family. Unfortunately, things start to go wrong at the tournament, resulting in injured and dead competitors, and it’s up to Lila to figure out who’s behind the attacks.

Unlike its predecessor, Dark Heart of Magic has no need for extensive world-building; therefore, the story takes off right from the get go. I was completely engrossed as the story unfolded, and I found that the additional characters framed the tale perfectly. We learned so much more about not only Lila’s heritage, but what brought the current warring situation to a head. I appreciated that each character is multi-faceted, although the antagonist, Victor Draconi, is just downright evil.

As much as I love her, I was a bit frustrated with Lila this time around. It took her way too long to put together all of the pieces of the puzzle and make connections that were pretty obvious. Lila’s constant “it’s on the edge of my memory” bit was annoying, as was the fact that one of the bad guys basically had to spell out to Lila what was happening and why. But maybe I’m just a super-sleuth. haha.

Once again, narrator Brittany Presley does an excellent job of capturing each character’s persona within the context of their voices. I can tell the personalities and corresponding moods of each just by listening to her performance. She continues to capture both the youth and life experiences of the each of the primary characters.

Overall, I enjoyed this Dark Heart of Magic. I liked the standalone story of the Tournament of Blades and how it brought out each character’s personalities, strengths, and weaknesses. I also liked Lila discovering more about her heritage and finding unexpected surprises. Finally, I really adored the progression of the feelings between Lila and Devon. While the book is the middle of a trilogy, it shines as a standout while setting up the final battle. I am expecting big things from Lila, and cannot wait to see where this all goes!

Note: I received an audiobook copy of this title as a gift from the author.