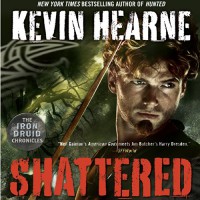 Shattered opens with the exciting addition of Atticus’s arch-druid, Owen, fresh off one of the time islands and unaware of the millennia that have past since he was last awake. As Atticus and Oberon work to acclimate Owen to the twenty-first century, Granuaile takes her own Druidic journey and heads to India to meet up with Latcha and save her father from a demonic possession.

So much happened in Shattered! It was exciting to listen to; however, it did get confusing at times. This time around the story is shared by three voices (Atticus, Granuaile, and Owen) and two different POV tenses (Atticus in past tense, while Owen and Granuaile are present tense). Additionally, there are time lags and overlaps between the different narrators which left me scrambling at times to keep up.

The overall stories of the Tuatha Dé Danann chasing after Atticus AND Loki’s intentions for Ragnarök, seem to take a backseat in this one… at first. But then the pieces of the puzzle slowly lock into place until BAM! two huge reveals and a lot of forward momentum. In fact, the events are so huge, that there will be impacts from the revelations for a long time.

I loved the addition of Owen, Atticus’s arch-druid, who is now physically younger than Atticus (even tho he looks older) by a couple millennia. Atticus helps restore his body to a more youthful state and acclimate him to the modern times. His POVs add additional comic relief and thoughtful insight to the tale. Allowing the pair to come to terms over their past filled a void I didn’t realize was there. Watching teacher become student was humbling for both.

I also enjoyed the addition of Orlla, Granuaile’s Irish wolfhound, and look forward to the time when she and Oberion can speak together.

I spent a lot of the book fretting for Granuaile. Between the ominous predictions from Jesus and Granuaile’s own hindsight on her actions, I seriously was afraid of what would happen by the end of the book. No spoilers - something significant does occur, and I survived the tale. haha. But not since the battle with the Norse pantheon in the quest to end Thor has there been such violence and destruction in the Iron Druid Chronicles.

Once again, I enjoyed Mr. Daniels’ performance. While I’m not quite certain I like the three points of view over just having Atticus narrate, I do love the additional voices of Owen and Orlla. However, Mr. Daniels changed his narrator voice for Granuaile (I checked), making it less soft and feminine. This cause some confusion for me between her parts and Atticus, especially when I’d been away and came back to the book in the middle of a chapter. He also introduced a new voice for Loki (appropriate to the storyline), but I felt it had a lot of Oberion in it.

In the end, Shattered is another engrossing story from the Iron Druid Chronicles. While the book had some dark moments, I enjoyed the counterbalancing humor provided most notably by Owen. The book brings forward some significant revelations, and I look forward to discovering what will happen next for Atticus and friends.