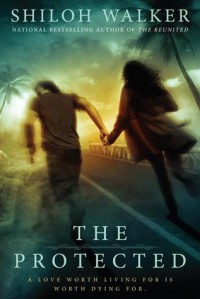 FBI agent Vaughnne MacMeans has a special ability - she can communicate with others without actually speaking. While her “talent” is fairly minor compared with many of the others on the team headed by Agent Taylor Jones, she has developed her instincts and honed her skills, making her a deadly agent. She is put to the test in her latest assignment: protecting 12-year-old Alex, whose psychic abilities have made him the target of an extremely dangerous man. Going undercover, Vaughnne moves next door to Alex and his “dad,” Gus.

Gus Hernandez has one mission in life, to keep Alex safe from those that hunt him. At the dying request of Alex’s mother, Gus has done everything to protect Alex for over four years, including constantly moving, killing and even using Alex’s abilities. Although he is attracted to new neighbor Vaughnne, he will not act on his desire, nor will he allow her to become a distraction in their lives - even if it means he has to eliminate her.

In general, I enjoyed The Protected from start to finish. The overall story involving a suspenseful race to protect Alex is exciting and well-written. Reyes, the primary bad guy is portrayed as an evil man - someone a reader loves to hate. I would have enjoyed a few more scenes developing his nasty persona, providing me more reason to cheer for his demise. Instead, Alex is hunted by henchmen and goons-for-hire, giving the reader an array of chase scenes, killings, and mayhem, some of which feature others with psychic talents.

The story is thrilling - but not so tense that I was unable to breathe. Keeping Alex safe became increasingly harder as the book progressed and the stakes grew higher. At times, the number of "bad guys" one-after-another felt over done, but it kept an accelerated tempo in the story. I also liked how the entire situation was resolved - it was done in such a way that made "things" okay.

One part that gave me pause was the inclusion of FBI freelance psychic Nalini. It wasn’t her part in the story - that was pretty interesting and entertaining, but rather that many of the sections told from her POV were overly vague and too loose, which made them difficult to follow. I also felt she had a bit of a split personality - I was confused as to who she wanted to do what and why she didn’t contact others. Although there was a reason for everything, which was revealed in the end, it broke the tempo of the story too much at times.

In addition, I was annoyed by the lack of trust and cooperation by the different people trying to look out for Alex. Nalini, who sometimes works as an FBI agent, pulls in friend Tucker, but neither are working for the FBI. Vaughnne is working under orders from Taylor/FBI. Gus is doing whatever he needs to protect his family. And throughout the story, these people who should be looking out for Alex’s best interest are completely working against one another. It really frustrated and even confused me at times.

Beyond the main storyline is the romance between Vaughnne and Gus. Each experience an intense and immediate attraction for the other. Although both are extremely deadly, and they are basically lying to one another, they experience a pull, something neither has felt for anyone in a very long time. Add to it the steamy locale of Orlando, FL, which pumped up the heat factor and left me practically begging for these two to get together!

I like Vaughnne a lot. She is confident and strong, yet vulnerable and able to love. She is also very careful not to cross any lines from which she couldn't return. It is refreshing that she holds her job with importance, and it’s not just used as a mechanism to do whatever she wants. She has integrity that gives her character both a shine and grit.

On the other hand, Gus is not a good man; he says so several times. And he's not really a "bad boy" either. He's someone that does what he needs to. And for the past four years, his only job was protecting Alex at any cost. To me, this went too far when he used Alex to read people and wouldn't let Vaughnne help at all - in fact he worked against and hurt her. It made it harder for me to connect with and like his character. If it wasn't for Vaughnne's feelings towards Gus and seeing him through her eyes, I don't know if I would have liked him. But that's who he is supposed to be - so the author did a great job in creating Gus.

The final parts of the story had some of the most touching scenes as Gus must decide what to do with his life. Vaughnne tugged at my heartstrings as she all but accepted her fate with a heavy heart. The Protected had a very good ending and enjoyable story all around.

In conclusion, The Protected is an entertaining, suspenseful story with a side of steamy romance. I enjoyed the action and flow of the overall story centering on the protection of Alex. I felt the romance was tender, even though I was a little mad that it took so long for Gus to trust anyone, especially Vaughnne. And the fact that there was no communication between Nalini-Tucker-Vaughnne-Taylor made for some frustrating reading. But I loved the way the story concluded, and in the end, I fell for Gus and Vaughnne.
Tweet