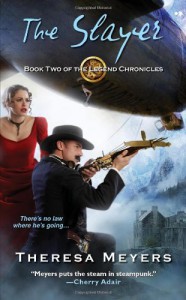 You have to love a book that starts out in the middle of a stage coach robbery. Taunting and name calling leads to four guns cocked and aimed at our hero, Winchester Jackson. And then all hell breaks loose when the an enchanting contessa climbs off the coach and proceeds to slaughter the entire gang of outlaws. The Slayer starts off with a bang and rarely slows down.

The Slayer is the second book in the Legend Chronicles trilogy, overlapping in content and time with the first book, The Hunter. Although you need not have read the first book in the series to enjoy The Slayer, a bit of background is helpful. The books are set in a steampunked version of the “wild west,” where it has been prophesied that the Jackson brothers are the Chosen who will bring together the three pieces of the lost Book of Legend and defeat the evil demon lord, Rathe.

This book follows the adventures of Winn, the eldest of the Jackson brothers, each trained as a Hunter (defenders of humans against the Darkin) and each with a bit of a chip on his shoulder. Winn has given up tracking down and hunting the paranormal and supernatural beings that roam the earth, but when the Contessa Alexa Drossenburg, a vampire, asks him for help, he finds it hard to say no. Winn finds that the pull of being a Hunter is too strong and agrees to help the vampires recover a piece of the Book of Legend (and brother Colt telling him to do so helps influence the decision).

I very much enjoyed The Slayer, even a bit more than the first book; there was less detailed world-building and more of an organic growth to the mythology and story. The action and tempo, which was fast-paced during the action scenes, but a bit slower during the inter-personal time, was entertaining.

The romance between Winn and Alexa (aka Tessa) was slow but smoldering. I felt the pace of their “courtship” was fitting as they took the time to learn more about each other. They are natural enemies - each having to learn to accept the other and that preconceived notions aren’t always true. Their mutual attraction is powerful, and while neither deny their attraction to the other, they each hope to keep it in check. They never forget who they are, but see uniqueness in the other-how the other is different from any (Darkin/Hunter) they've met before. And although it takes all book for them to finally consummate their relationship, the story is filled with sexy glances, simmering touches and smokin’ kisses. This is one of the wonderfully vivid examples:

"As she walked by, the tantalizing scent of sweet female filled his nose and the satin of her dress made the sounds of sheets moving on a bed."

I did feel that there were some inconsistencies with the Darkin and powers during the course of the story. For example, Tessa has the ability to dematerialize and reappear in another location. Yet in the middle of the story there were a few times where she unnecessarily put herself at great risk by physically jumping from one place to another. In addition, I felt that the time pressure Winn and Tessa kept placing on themselves (Winn was counting off minutes as time slips away, yet they have a couple of weeks to “get the job done”) was a bit dramatic. While these things aren’t deal breakers, it did bother me enough that I made note of it a few times while reading.

I also wanted more from/with Rathe, the “bad guy.” His presence was more of an "assumed" one until the very end. I hope he has a bigger role in the final story. In addition, I am looking forward to seeing how some of the open-ended pieces conclude, especially those involving inventor friend, Marley.

Overall The Slayer is a delightful story. I loved that it fed directly from last book. The flow of the story was mostly spot on, and even when it did get a little slow, it wasn’t repetitive. I am most certainly looking forward to the next story (The Chosen, March 2013) to see how it will all wrap up.